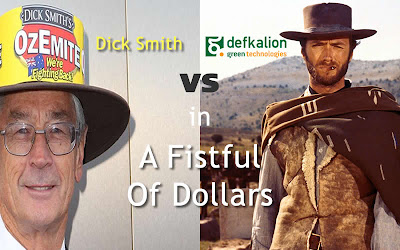 NOTE: We are in the middle of transitioning away from Google's Blogger platform to a brand new site which is still under construction at present, so please excuse any broken links or features that are not yet enabled - Thanks, Free Energy Truth.

The site will go "live" a few weeks from now.

Here's an article by Michael Prescott that you'll all recognise yourselves in.

"Now, as has been frequently pointed out, this use of the term "skeptic" is more than a little misleading. In common usage, a skeptic is someone who maintains an open mind, insisting on evidence for any claim. The more unusual the claim, the more stringent the evidential demands. According to this view, the skeptic has no private agenda, no personal bias, but serves only as a guardian of the truth, who weeds out unsupported allegations and superstitious imaginings. The skeptic is the proverbial Missourian; though willing to be convinced, he says, "Show me."

That's the theory. In practice, things are different. Far from being a state of habitual open-mindedness, today's skepticism is characterized by resistance to any new ideas or new evidence, and unwillingness to critically examine its own biases. These tendencies, in turn, rest on a very definite agenda, promoted by a clear and comprehensive worldview..."

BINGO! Michael. "resistance to any new ideas or new evidence, and unwillingness to critically examine its own biases" Thta's it! That's THE line, right there. Nailed it Michael. Nailed it perfectly. Tell em what he's won Johnny!

and again here "These tendencies, in turn, rest on a very definite agenda". Oh yeah, that's it right there. Nail on the head.

Prescott identifies them in all but name: "Pseudosceptics" or the now more appropriately named "PseudoscepTICKS".

"They are creatures of comfort and routine, not explorers. They cannot think outside the box. They will, in fact, deny that there is or ever could be anything outside the box - and they'll heap scorn on anyone who suggests otherwise. They'll call names, cry fraud, and holler that civilization is in danger and the barbarians are at the gates. They'll do anything, really - except examine their own assumptions with a remotely critical eye."

Check out the new updated site!

Andrea Rossi has his own inimitable style when it comes to language. Entertaining, if nothing else.

Andrea Rossi has his own inimitable style when it comes to language. Entertaining, if nothing else.

MSNBC.com reports on Senator Bruce Tarr's invitation to Andrea Rossi to base any eCat manufacturing facilities in Massachusetts.
It's a regurgitation of the original (and better) article in the Boston Globe.  The MSNBC article is only mildly significant in the sense that it is yet more mainstream coverage.  Also worthy of note is that MSNBC (as mainstream as you can get) are actually covering the story more than the majority of the "alternative media" sites who should be ALL over this news.
Widen Your Outlook
Yes, there looks like a much bigger economic collapse coming, and yes, Isra-hell are shaping up for an attack on Iran which could pull in China and Russia and escalate into a much wider conflict, but that does not excuse the alternative media from reporting on one of the SOLUTIONS to the problem!
I don't know what it is, but they seem to report on every other alternative topic (except free and exotic energy developments) for some reason.  It's time they got with the program.