The long-rumored ecat factory could soon become a reality in Sweden. Rossi and his partners at Hydrofusion; the Northern European licensee for his low energy nuclear reaction (LENR) technology, made an offer on a factory in Sweden. Rossi toured the 10,000 square meter factory and made a $3 million (€2.68 million) to $5 million (€4.47 [...]
Swedish/British startup Hydro Fusion and Andrea Rossi’s Leonardo Corporation are looking for a utility to serve as the customer for the first commercial low energy nuclear reaction (LENR) heating plant. A press release on Hydro Fusion’s website states that the two companies want to have the first central-heating plant using Rossi’s ecat LENR technology up [...]

DEAR READERS:
TODAY A BIG MESS IS POPPED OUT FROM A SHORT MEASUREMENT THAT HAS BEEN DONE THE LAST WEEK. I REALLY HAVE DIFFICULTY TO UNDERSTAND WHY SOME PERSONS HAVE TOTALLY IGNORED WHAT I CLEARLY SAID IN MY PRELIMINAR STATEMENT IN THE REPORT PRESENTED IN ZURICH: I SAID THAT ALL THE DATA ARE NOT FINAL, THE VALIDATION, THE R&amp;D, THE CERTIFICATION OF THE HIGH TEMPERATURE REACTOR ARE IN COURSE AND THE FINAL REPORT WILL BE RELEASED WITHIN MONTHS. NOW, A GUY COMES HERE (INVITED FROM US) MAKES SOME HOUR OF MEASUREMENT, GOES AWAY AND A WEEK AFTER MAKES A PRESS CONFERENCE LIKE HE HAS MADE A PROCESS OF VALIDATION THAT TAKES MONTHES: DOES THIS MAKE ANY SENSE? I AM VERY CONFUSED. ANYWAY:
THE EXTERNAL SURFACE OF OUR REACTOR IS 933 CM^2
THE TEMPERATURE WE REACH WHEN IT IS STABLE IS 1050 CELSIUS ON THE EXTERNAL SURFACE. THE GUY IS ESCAPED FROM US BEFORE THE REACTOR REACHED THE DUE TEMPERATURE SAYING HE HAD SEEN ENOUGH ( ENOUGH OF WHAT?).
THE MAX POWER OF THE RESISTANCE IS 8 kW
WITH THESE NUMBERS ONLY, THE ENERGY PRODUCED IS ABOUT 17 kWH/H, WITHOUT CONSIDERING THE ENERGY FROM THE INTERNAL CYLINDER (WHATEVER IT IS), THE CONVECTION ENERGY ( WHICH IS A LOT).
NOW: IN THE NEXT 2 MONTHS WE HAVE TO ARRIVE TO A PRECISE DETERMINATION OF THE MAXIMUM COP, BUT JUST FROM THESE VERY BASIC ANC CONSTANT NUMBERS ( INDIPENDENT FROM THE MEASUREMENTS OF AMPS AND OHMS) WE HAVE A COP AROUND 2.
THE ITER PROGRAM, TO MAKE ENERGY WITH NUCLEAR HOT FUSION, IS COSTED 100 BILLION OF EUROS AND GOT NOT EVEN 1.01 OF COP.
SO, WHAT ?
IN THE FINAL REPORT YOU WILL SEE A LIST OF MANY PROFESSORS AND ENGINEERS WHO ARE MAKING ALL THE NECESSARY MEASUREMENTS FOR MONTHS.
LET ME WORK, AND LET THE TEAM OF PROFESSORS AND ENGINEERS WHO ARE MAKING THE VALIDATION ANDE CERTIFICATION WORK. THIS TIME, ANYWAY, WE GOT FRIENDLY FIRE, IT APPEARS.
ANDREA ROSSI

[With thanks to Francesco CH]

Important Update from Mats Lewan of Ny Teknik at end of this post.

Hydrofusion, the company behind Andrea Rossi’s official web site at ecat.com (and his N European rep) has issued a press release indicating that it cannot support Rossi’s claims for the HotCat. As I always caution against jumping to positive conclusions on flimsy evidence, it is also too early to tell how significant this announcement is. The wording is curious. Some commentators think the press release is framed to distance the company from the claims while one individual claims that a minor technical glitch (ac input)  lies at the root of the failure. Started by a small group of Swedish scientists, Hydrofusion is uniquely placed to make a call one way or the other. They fully understand the controversy behind these extraordinary claims and must know that such a statement will be pounced upon as tealeaves to be read.

Hydro Fusion witnessed a new independent test of the high temperature ECAT prototype reactor on September 6th in Bologna. Although no full report has yet been received, early indications are that the results of the July 16th/August 7th reports could not be reproduced.

Hydro Fusion cannot at this stage support any claims made, written or other, about the amount of excess heat generated by the new high temperature ECAT prototype.

The timing is curious. Hot on the heels of his Zurich appearance, AR was keen to yell the following:

To be fair, he did say at the conference that these were preliminary results that required confirmation (even as he said he believed them). If we step back, however, I could not help but wonder why the inventor would arrive at the first meeting of licensees who are reported to have paid real money to ride this train and talk about anything but tangible business stuff. When he announced his million-unit factory, Autumn 2012 was touted as a target for results. What those results were to be is a little vague but most observers expected to see some sort of proof that such a project really does exist. Of course, although there has been no official announcement that his ‘plans’ have changed, it is not too big a stretch to guess that a lack of certification might put a damper on things.

On that subject, I read many people talking about the claimed certification for the 1MW plant. When referring to the CE label, it is important to note than in Europe, this can be done in-house. As long as you have a device that you can categorize on the list of official product descriptors (tv, fridge, boiler etc) you can stick the CE label on your product self-confirming that it conforms to requirements. Voila! It is certified. Rossi confirmed this during his talk on Sunday. He added that the company also requested external certification but it was not clear exactly what that entailed. He did point out that since the eCat does not use radioactive materials, does not produce any and the device does not radiate outside its enclosure, it falls under normal rules for conventional non-nuclear machines (such as microwaves and phones).

It was a curious talk and curiouser still that the audience did not tackle him on details such as roll-out plans. I can only guess that back-channel communications are being used for such commercial-in-confidence talk but nothing would surprise me in this ever-surprising saga.

Hydrofusion’s speedy press release may or may not be a warning shot of things to come. Leaks are beginning to appear as more and more actors come into play and one man finds it impossible to cover all bases. As is my refrain, it is always possible that we are reading the signals incorrectly – but the battleship does appear to be listing. I genuinely hope that our worries are unfounded and reserve the final leap for the upcoming promise of UniBo’s validation. If he delivers, nothing else will matter and, if not, I predict an eCat exodus.

[As an aside, it appears that Domenico Fioravanti, the engineer Rossi claims acted as the secret customer's rep at the 1MW acceptance test last October (and was outed as the source of the original HotCat leak) is also one of the engineers behind the latest HotCat tests. This was spotted by a vigilant e-catworld reader: Screenshot of filepath and the original HotCat file. Note the name 'Cures' at bottom left on pages 9 and 12.]

With thanks to Mats Lewan at Ny Teknik, he has just informed me that the Swedes have halted their eCat investment after the failed tests. The article is in Swedish but Google translates it well:

[Note that the currency is Swedish Kronor]

Investor Group had instructed the SP Technical Research Institute of Sweden, to monitor the measurement, and the researchers who attended measuring an input electrical power that was two to three times higher than Rossi himself measured.

Despite this, Rossi presented a measurement report September 9 based on earlier tests where a lower input power and an energy surplus reported.

This is about as bad as it could get and may short circuit all other considerations if it is verified. The company stresses that the tests were for the HotCat but it is interesting to note that they are halting their investment [until further notice?]

[With thanks to Mats]

Bored with all the normal Christmas catalogues filled with iPods, iPads, DVD's and electrical items?  Then flick through a 1MW Cold Fusion brochure instead. 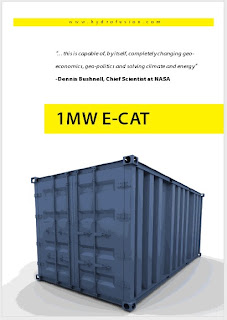 Produced by Hydrofusion - the same company responsible for ecat.com.   Not sure about the quotation from Dennis Bushnell. His comment that "this is capable of, by itself, completely changing geo-economics, geo-politics and solving climate and energy" was made in relation to the entire field of LENR (Low Energy Nuclear Reactions), not about the ecat in particular. 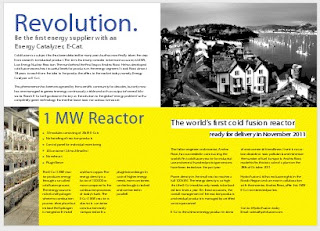 Anyway, put me down for half-a-dozen, in assorted colours.